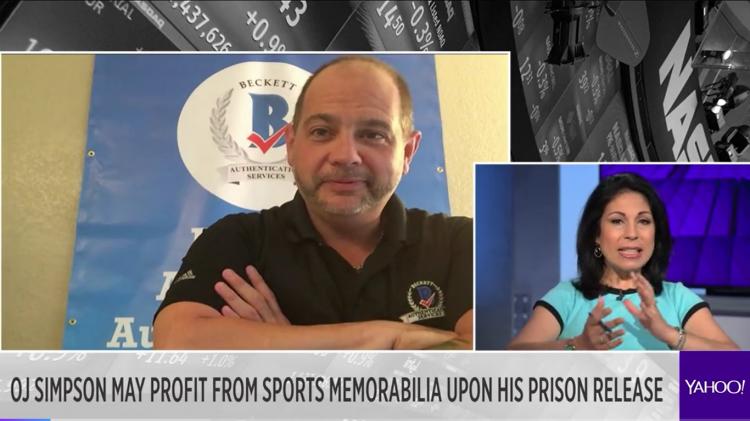 Will OJ Simpson’s parole raise the value of the ...
by Beckett Authentication Serviceson Jul 21, 2017in Football Autographs & Memorabilia

“The Juice” may be sprung from a Nevada prison come October 1, but don’t expect OJ Simpson’s parole to raise the value of the Football Hall of Famer’s memorabilia.

“Demand for Simpson memorabilia has been low for some time,” says  Steve Grad in the video above. Grad is the principal authenticator at Beckett and a frequent guest on the History Channel’s popular TV show, “Pawn Stars.”

Grad says he doesn’t expect a spike in prices or demand for Simpson memorabilia after the Heisman Trophy winner was granted parole after serving nearly 9 years in prison for a Las Vegas robbery.  He  speculates there may be demand for signed Simpson rookie cards. But otherwise, he expects the market for Simpson memorabilia to remain flat and even diminish.At 70 years old, there’s talk signing autographs might be one of Simpson’s only options for making a living.  While it is legal for Simpson to monetize his name after doing his time in the clink, Grad says he’ll most likely opt to be paid in cash for autographs so he can hide the income from lawyers looking to collect restitution for their clients.

In 1997, Simpson was found liable in a civil trial for the 1994 stabbing murders of his ex-wife Nicole Brown Simpson and her friend Ron Goldman. The court ordered Simpson to pay the families $33.5 million dollars in damages.

According to Grad, as more Simpson autographs pop up, the value of current Simpson memorabilia on the market is expected to sink.

He believes selfies with OJ Simpson will prove to be popular, fetching between $100 and $150 for a pic with the notorious former athlete and actor.

Watch the full interview via the link above.