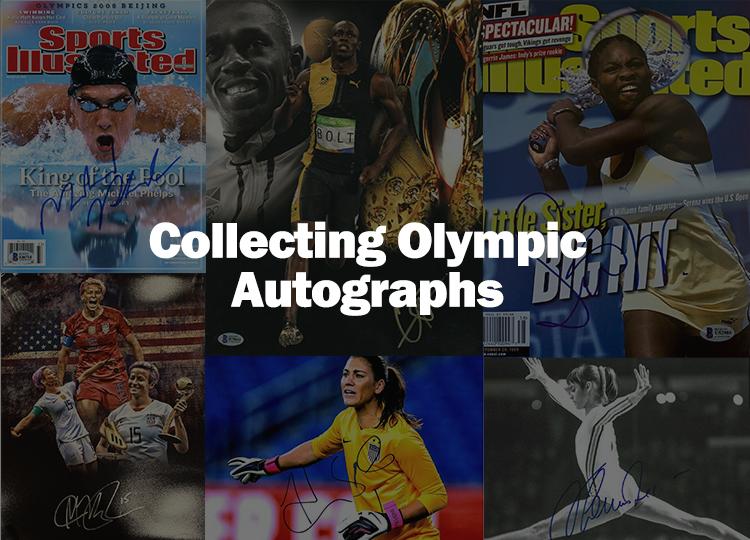 Every four years athletes from all over the world gather to compete for the chance to win a gold medal for their country. Legends are born, records are set and broken, and the collectible world gains a new batch of athletes to collect signatures from.

Collecting signatures of Olympians isn’t something new, but in recent years has seen an increased amount of interest. Fueling this interest are trading card sets that are released each Olympic year by major card manufacturers, typically including a few autographed cards within the set.

Outside of collecting autographed trading cards, interest in autographed memorabilia has grown as well. In the past Olympians would sign at speaking engagements or if they had published a book at a book signing, but in recent years it has become so mainstream that Olympians like Michael Phelps have attended trade shows to sign autographs for fans.

Olympic autographs are becoming easier to obtain, and the marketplace has a wide selection available for collectors. We expect there to be a slight delay on availability for Olympians from the 2020 (2021) games. Unlike years past, due to the Covid-19 pandemic, spectators have not been present to watch the games and have been barred from asking for autographs. While this will decrease the number of autographs immediately available, we expect that during press tours after returning home, many autographs will be signed and subsequently listed for sale in the market.

In terms of pricing most Olympic autographs start at the $150-$200 range, but the pricing varies significantly depending on how decorated the Olympian is and if they are a professional athlete in their sport playing for a national league like the NBA, NHL, MLB etc. Overall professional athletes who also compete in the Olympic Games are less collectible on Olympic specific items; they are also more difficult to find than non-Olympic items, mainly due to their lack of popularity.

Of course there are few exceptions to the rules where on items like the 1992 Dream Team, a complete team-signed item can be more valuable, because of how many hall of famers and stars were on that specific team, when compared to a NBA Championship team-signed item.

Nevertheless, Olympian signed memorabilia remains highly collectible and with 613 US atheletes competing in the 2020 (2021) games, there are plenty of options to kick off an Olympic Collection.